How to manufacture CAR-T cells

Manufacturing CAR-T cells is a complex process requiring the collection of T cells from autologous or allogeneic sources and subsequent activation, gene delivery, and expansion of the modified cells. This field of research is extremely active as several researchers continue to attempt to improve the overall efficiency of current CAR-T cell platforms. In this article, we provide an overview of the most commonly employed methods and expand on their advantages and limitations.

The manufacturing process of chimeric antigen receptor (CAR) T cells remains one of the most challenging steps of this emerging therapy. Conventionally, CAR-T cells are produced from autologous T cells. The process requires collecting peripheral blood mononuclear cells from cancer patients and isolating their T cells by leukapheresis. These cells are subsequently subjected to genetic modification and expansion before being reinfused into the patient where they will mediate the elimination of the cancer cells. The process is time-consuming and often unsuitable for the treatment of high-risk patients. For this reason, allogeneic CAR-T cell therapies have emerged as a promising alternative.

Most CAR-T cell therapies approved to date are anti-CD19 autologous-based therapies. However, this approach suffers from multiple limitations related to the fact that T cells need to be harvested from the patient who will receive the treatment. Not only is this process time-consuming and costly, but there is also a high risk of failure. Another practical hurdle lies in the quantity and quality of T cells needed to initiate CAR-T cell production. This represents an important hurdle because most cancer patients eligible for these treatments have already received chemotherapy or radiotherapy, which are lymphodepleting and thus significantly reduce the abundance of T cells in their systems.

In contrast, allogeneic T cells provided by healthy donors with high amounts of functional lymphocytes can be used to generate “off-the-shelf” CAR-T cell products. Opting for an allogeneic-based production of CAR-T cell therapies has been considered by several experts as a potential game-changer because with would widen the therapeutic window of CAR-T cell therapies and make them more affordable and accessible. Additionally, patients would not need to wait to receive their treatments (allogeneic cells can be cryopreserved and used only when needed). Thus, manufacturing costs would be lower, and the healthier T cells could provide a more potent therapy in comparison to their autologous counterparts.

Despite the clear advantages of an allogeneic-based treatment, many challenges remain to be solved. For instance, there is a high risk of allogeneic CAR-T cells leading to severe graft-versus-host disease (GVHD) which could result in allorejection and hamper anti-tumor activity. One strategy being used to mitigate that risk consists of the use of gene-editing tools to generate T cell receptor (TCR)-deficient cells. Additionally, alternative strategies as the use of repeated rounds of administration, chemotherapy-resistant CAR-T cells, or genetically eliminating molecules known to increase immunogenicity have also been tested with promising results.

Experts believe that the creation of an allogeneic T cell bank could hold the key to ensure this technology becomes more widespread. But this manufacturing technology is still far from reaching commercial maturity.

Whether T cells are autologous or allogeneic, they can be harvested by leukapheresis, a specific form of apheresis in which leukocytes are extracted from the blood of patients or healthy individuals supplemented with anticoagulants by centrifugation or membrane filtration and reinfusion of the remaining blood components with replacement fluid back into the donor. Several FDA-approved CAR-T cell therapies are currently prepared via leukapheresis including Yescarta (axicabtagene ciloleucel), Kymriah (tisagenlecleucel), and Provenge (sipuleucel-T).

The activation of T cells in vivo takes place when these cells encounter antigen-presenting cells such as dendritic cells (DCs). The interaction between T cell receptors (TCR) and the major histocompatibility complex on the surface of DCs through the action of costimulatory molecules like CD28, 4-1BB, and OX40, leads to T cell activation, proliferation, and differentiation.

Several methods can be used to achieve this response in vitro:

Gene delivery is essentially achieved by viral (i.e., retro- or lentiviruses) or non-viral methods (i.e., plasmid-based). The use of retrovirus or lentivirus gene transfer typically results in high transduction efficiencies (up to 70%) but it tends to be more expensive than conventional plasmid-based transfection methods. Of the two viral vectors typically used for CAR-T cell manufacturing, lentiviruses are usually preferred because they are less prone to oncogenic gene insertion than retroviruses.

Lentiviruses are typically produced via transient transfection using large amounts of plasmid DNA. In contrast, retroviruses can be produced using stable cell lines which considerably reduces their production cost. The development of stable cells for lentivirus production is expected to significantly reduce production costs while fully leveraging the efficiency of these vectors.

The use of non-viral vectors for CAR-T cell production is a relatively new approach. This method relies on the use of transposon/transposase systems for CAR gene delivery. These systems are characterized by their ability to change position within a genome via transposase excision and insertion. Plasmids carrying CAR components and transposon/transposase elements are transfected into T cells prior to activation via electroporation.

Transposon systems were found to have gene integration efficiencies similar to viral transduction. Additionally, this method abolishes the need for clinical-grade viral vector production, significantly reducing production costs. Its main drawback is that the time required for CAR-T cell generation using this approach is higher than with virus transduction. Although preliminary reports have shown promising results, more studies are needed to bring this technology to commercial maturity.

In the clinical pipeline, viral transduction methods are the predominant technology for CAR-T cell generation. Of the two conventional vectors, lentiviruses are the most commonly used. To date, plasmid DNA transfection yields remain significantly lower at the clinical stage.

The development of expansion methods suited for large-scale clinical-grade manufacturing of CAR-T cells remains challenging. Conventional methodologies such as T-flasks and plates are usually considered impractical and hard to implement at this scale. In contrast, static culture bags connected by sterile tubes have emerged as a simple and cost-efficient alternative with extremely low implementation costs. The system minimizes open-handling interaction and thus reduces the risk of contamination.

Rocking motion (RM) bioreactors are a suitable alternative to static culture bags. This system uses a perfusion regime that removes growth-inhibiting molecules and constantly feeds CAR-T cells with nutrients. Despite the technical hurdles associated with the implementation of these bioreactors, the methodology achieves a more straightforward production method (semi-automated) while significantly reducing media consumption.

CAR-T cell manufacturing remains a complex process and hard-to-implement at a large scale. These cell therapeutics are usually produced by harvesting T cells from either autologous or allogeneic sources. These cells are subsequently activated and transduced/transfected with previously designed CAR components. Finally, the resulting CAR-T cells are expanded prior to being reinfused into the patient.

The predominant methods in the clinical pipeline are bead activation methods in combination with viral transduction (lentiviruses are favored over retroviruses) and expansion in RM bioreactors. Current methodologies are expected to change significantly in the coming decades in response to the challenges still hindering the widespread adoption of this treatment. 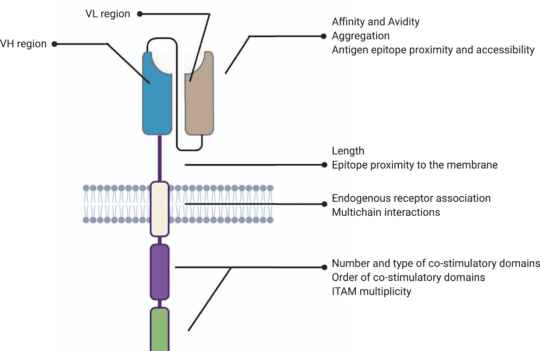 The structure of CAR-T cells 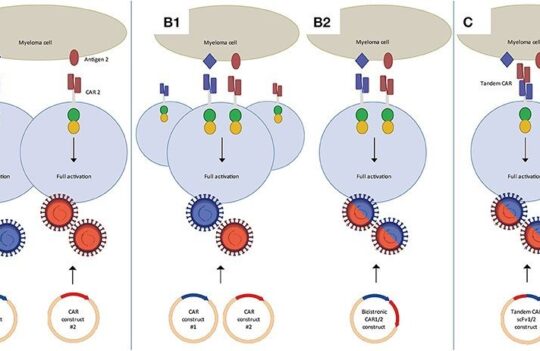