Researchers have recently demonstrated that an oncogenic mutation (R110) in the immunoglobulin light-chain variable region (IGLV) is an important and widespread indicator of poor prognosis in chronic lymphocytic leukemia (CLL). Additionally, the team developed and validated an antibody-based approach for the early detection and potential treatment of CLL patients carrying this harmful alternation. Using the hybridoma development technology, researchers designed antibodies to detect a single-point mutation and better understand the prognosis for the disease.

A study led by researchers from the Ulm University (Germany) and Leiden University Medical Center (The Netherlands) recently showed that variant-specific antibodies can be used to determine the chances of survival in CLL patients. The antibodies, developed by ProteoGenix, were successfully used to detect a single-point mutation in the IGLV3-21 gene (R110) which additionally correlated with poorer clinical outcomes.

CLL is an incurable B-cell pathology with a high incidence among adults in Western countries. But its progression is widely variable, and depending on the specific mutations carried by patients (subsets), radically different outcomes are expected.

Up to now, studies have focused on demonstrating the correlation between the mutational status of the immunoglobulin heavy chain variable (IGHV) gene and the patient’s chances of survival. In contrast, this study showed that previously described disease subsets should be redefined because the newly described mutation in the IGLV3-21 gene (light chain) was proven to be more widespread and to correlate more strongly with unfavorable clinical outcomes.

The early identification of this mutation has the potential to significantly alter the progression of the disease. Thus, this work represents an important stepping stone in the development of accurate diagnostic tools for the early detection of different CLL subtypes. Eventually, these antibodies may also serve for the development of new biotherapies for CLL.

We feel honored to have been chosen by the amazing multidisciplinary team led by Prof. Hassan Jumaa (Ulm University, Germany) to develop these antibodies and contribute to accelerating their research.

We congratulate the team for their impressive achievements and we are thrilled that the variant-specific antibodies generated by ProteoGenix contributed to it. 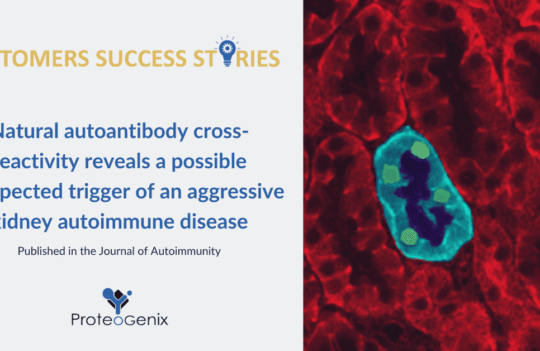