Researchers have recently discovered a new mechanism that explains the development of membranous nephropathy (MN), a rare autoimmune disorder. By determining the exact epitopes bound by the autoantibodies responsible for kidney damage in the MN disease, these researchers have finally cast some light into what may trigger the disease in middle-aged individuals. This finding will also be vital for the early detection of the disease and subsequent mitigation of aggressive kidney deterioration in MN patients. We feel honored the team chose ProteoGenix to develop the hybridoma cell lines that helped to demonstrate this hypothesis.

A study led by researchers from the University of Manchester and the Manchester Academic Health Science Centre (UK) recently discovered a new mechanism that may explain the onset of membranous nephropathy (MN) in middle-aged individuals. Their work will greatly assist in the development of high precision tools for early-stage detection which, in turn, will allow early treatment to slow down disease progression and preserve kidney function in affected individuals.

MN is a rare and chronic autoimmune condition characterized by the deterioration of the filtering membranes in the kidney causing protein leakage to the urine (proteinuria) and reduction of protein concentration in the blood. The pathology also leads to the development of edema (swelling), high cholesterol, decreased kidney function, and it often results in irreversible kidney failure (in 1/3 of the patients). Unfortunately, the early diagnosis of the disease is not yet possible and it is only detected after it becomes chronic (with mature and high-affinity autoantibodies) and patients have already sustained extensive kidney damage.

Primary MN affects 1 in one hundred thousand people around the world. It mostly manifests in individuals over 40 and it has a higher incidence in men. In 70-80% of patients, MN has been linked to the presence of autoantibodies against the phospholipase A2 receptor (PLA2R), while autoantibodies against the thrombospondin type 1 domain-containing 7A (THSD7A) were found in 2-3% of patients.

These 2 antigens represent 2 distinct transmembrane cell surface receptors of podocytes (highly specialized epithelial cells covering kidney’s capillaries). Up to now, clinicians believed these 2 antigens represented 2 separate and independent causes of the same disease. But the study carried out by Dr. Maryline Fresquet and colleagues showed that this may not be the case.

After discovering some patients carried autoantibodies against the two antigens, the team set out to unravel what caused this cross-reactivity. The surprising results of their study, published in the prestigious Journal of Autoimmunity, showed that antibodies specific for the major epitope of PLA2R (P28mer), cross-reacted with a specific region in the THSD7A antigen – T28mer. Interestingly, these cross-reacting antibodies did not recognize the native protein THSD7A, but only the linearized region T28mer that becomes exposed during antigen processing.

This discovery indicates that frequent exposure to epitope T28mer/P28mer may be the actual trigger of the disease. Interestingly, researchers have also found that both T28mer and P28mer shared a high level of similarity to a specific region in peptidase S11 of Clostridium spp. This raises the possibility that exposure to certain pathogenic microorganisms during natural immunity development in early life, may lead to the development of MN later in life for patients with a genetic predisposition.

The natural development of PLA2R and THSD7A cross-reacting antibodies was further proved by hybridoma generation performed by ProteoGenix. By immunizing mice with the major antigen PLA2R, and further isolating a monoclonal antibody Moab 20-2-6 able to cross-react with the linear T28mer in protein THSD7A, the authors were able to show that naturally generated antibodies cross-react with the 2 major disease epitopes.

We feel honored to have been chosen by the team to develop this cross-reacting antibody by hybridoma, and we congratulate them for their impressive achievements that will undoubtedly play an important role in the early detection and timely treatment of MN. 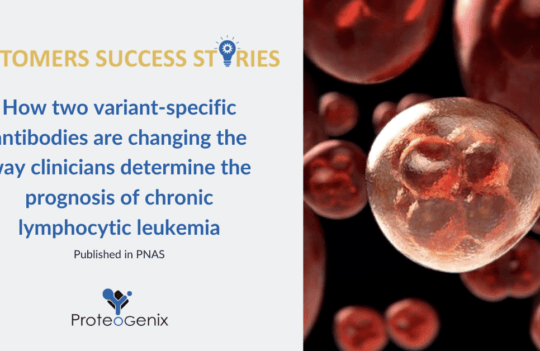